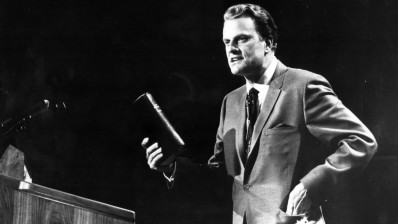 Billy Graham was an instrumental voice in my own spiritual awakening in 1969 when I was 16 years old. People I know like to criticize Billy Graham for not being more theologically sophisticated. But that’s always seemed to me to be a little bit like criticizing Nolan Ryan for not being a better batter, or Bill Gates for not ever having a song in the Billboard top ten. Nolan Ryan was not paid to hit the ball but to throw strikes, and he was pretty good at that! And we don’t know Bill Gates for his singing abilities but for his technical and entrepreneurial genius, and that genius is pretty impressive! So, to criticize Billy Graham for not writing anything comparable to Karl Barth’s “Church Dogmatics,” or for not teaching at some top tier theological seminary where he might have become a first-rate scholar is to completely miss his gifts and call.

When Billy Graham came to New York City for a Crusade (1957), Protestant clergymen came out both for and against him. Reinhold Niebuhr, a top-flight theologian, took what appeared to be a thoroughly negative view of Graham’s coming, “as though the eye were to say to the hand, I have no need of your” (I Corinthians 12:20). But Henry Pitney Van Dusen, the President of Union Theological Seminary where Dr. Niebuhr was a world-famous teacher, said – “There are many, of whom I am one, who are not ashamed to testify that they would probably never have come within the sound of Dr. Niebuhr’s voice or the influence of his mind if they had not first been touched by the message of the earlier Billy [Billy Sunday]. Quite probably five or ten years hence there may appear in the classrooms and churches of Billy Graham’s severest critics not a few who will be glad to give parallel testimony to his role in starting them in that direction.” (42)

Sam Shoemaker, another evangelist of the last generation, spoke of his ministry in a way that helps me understand and appreciate Billy Graham’s ministry.

I stand by the door. I neither go too far in, nor stay too far out. The door is the most important door in the world – It is the door through which men walk when they find God. There is no use my going way inside and staying there, when so many are still outside and they, as much as I, crave to know where the door is. And all that so many ever find is only the wall where the door ought to be. They creep along the wall like blind men, with outstretched, groping hands, feeling for a door, knowing there must be a door, yet they never find it. So I stand by the door.

The most tremendous thing in the world is for men to find that door – the door to God. The most important thing that any man can do is to take hold of one of those blind, groping hands and put it on the latch – the latch that only clicks and opens to the man’s own touch. Men die outside the door, as starving beggars die on cold nights in cruel cities in the dead of winter. Die for want of what is within their grasp. They live on the other side of it – live because they have not found it. Nothing else matters compared to helping them find it, and open it, and walk in, and find Him. So I stand by the door.

Go in great saints; go all the way in – Go way down into the cavernous cellars, and way up into the spacious attics. It is a vast, roomy house, this house where God is. Go into the deepest of hidden casements, of withdrawal, of silence, of sainthood. Some must inhabit those inner rooms and know the depths and heights of God, and call outside to the rest of us how wonderful it is. Sometimes I take a deeper look in. Sometimes venture in a little farther, but my place seems closer to the opening. So I stand by the door.

…I admire the people who go way in. But I wish they would not forget how it was before they got in. Then they would be able to help the people who have not yet even found the door… As for me, I shall take my old accustomed place, near enough to God to hear Him and know He is there, but not so far from men as not to hear them, and remember they are there too. Where? Outside the door – Thousands of them. Millions of them. But – more important for me – One of them, two of them, ten of them. Whose hands I am intended to put on the latch. So I shall stand by the door and wait for those who seek it. “I would rather be a door-keeper” (Psalm 84:10) – So I stand by the door.

Billy stood by the door to show people where and how to get in, and as one who was ushered by him into a deeper understanding and a fuller experience of the Gospel of Jesus Christ, I am so grateful that he was there. DBS+

One response to ““Well Done Thou Good & Faithful Servant” (Part 2)”